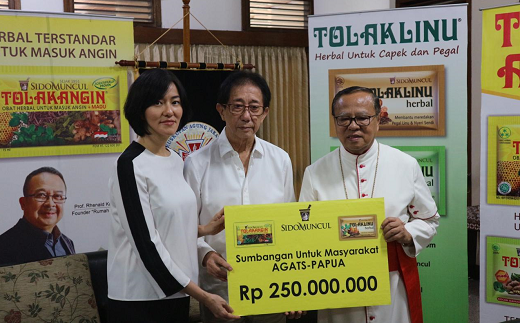 Jakarta, 30/10/2019 – PT Industri Jamu Dan Farmasi Sido Muncul Tbk. presented a Rp250 million cash donation to assist communities in Agats, Papua through the Archdiocese of Jakarta. The donation was handed by Sido Muncul Director Irwan Hidayat to the Archbishop of Jakarta, Mgr. Ignatius Suharyo in a ceremony held at the Jakarta Cathedral on Wednesday, 30 October 2019.

“The impetus to help started when I saw a viral video on social media depicting the situation in Agats. I thought to myself, the situation is pitiful, and I should help. I got the video from His Eminence the Cardinal and from His Excellency Bishop Aloysius Murwito,” said Irwan Hidayat.

Irwan added that he greatly appreciated the work done by the Diocese of Agats to serve local communities. Irwan saw that the Diocese is working at the right place, one where poverty and desperation are rampant.

The funds were handed to the Archdiocese of Jakarta for distribution to the Diocese of Agats, where it will be allocated to meet the community’s needs. In addition, it will also be used to fund services provided by the Diocese, such as education, healthcare, and empowerment.

Mgr. Ignatius Suharyo recounted the social situation in Agats during his tenure there. During his service six years ago, he saw that almost everyone in Agats were suffering from leprosy. Through the Diocese’s healthcare services, the disease was eradicated within four years.

“The same goes to education, as almost every resident was illiterate. There was one person who could read, but only at a primary school level,” said Ignatius.